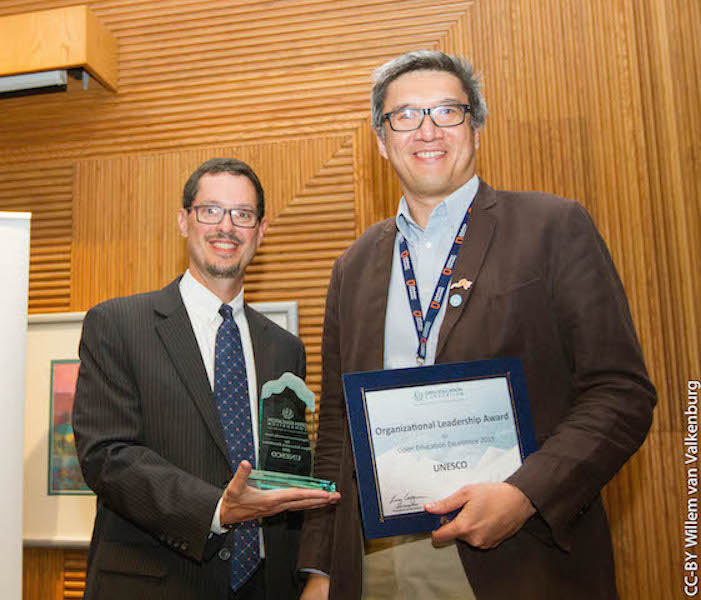 The Consortium’s newly elected president, James Glapa-Grossklag, offered the award to Abel Caine who received it on UNESCO’s behalf during the awards ceremony held on April 23rd as part of the Open Education Global Conference in Banff, AB, Canada.

Mr. Caine shared a few words during the ceremony.

By Abel Caine
Programme Specialist with the United Nations Educational, Scientific and Cultural Organization (UNESCO)
Knowledge Societies Division based at the UNESCO Headquarters in Paris, France

The United Nations Educational, Scientific, and Cultural Organization (UNESCO) believes that universal access to high quality education is key to the building of peace, sustainable social and economic development, and intercultural dialogue.

Within a framework of Open Solutions including Open Access to sharing peer-reviewed scientific information, Free and Open Source Software to stimulate all ICT activities, UNESCO advocates to Governments and key educational stakeholders that Open Educational Resources (OER) provide a strategic opportunity to improve the quality of education as well as facilitate policy dialogue, knowledge sharing and capacity building.

In 2001, the Massachusetts Institute of Technology (MIT), in an unprecedented move, announced the release of nearly all its courses on the Internet for free access. As the number of institutions offering free or open courseware increased, UNESCO organized the 1st Global OER Forum in 2002 where the term Open Educational Resources (OER) was adopted.

With the support of the Hewlett Foundation, UNESCO created a global OER Community wiki in 2005 to share information and work collaboratively on issues surrounding the production and use of Open Educational Resources.

With the continued support of the Hewlett Foundation, the Commonwealth of Learning and UNESCO organized the 2012 World OER Congress at the UNESCO Headquarters which unanimously released the 10-point Paris OER Declaration. The Declaration and the unique OER logo has become the global framework for all OER initiatives.

In 2013, UNESCO became the 1st UN organization to fully adopt free culture CC BY SA licensing on all publications. With very few exceptions, all new publications are released with CC BY SA and the license is being applied retroactively on the many thousands of seminal UNESCO publications.

In 2014, UNESCO started releasing all publications in mobile-friendly ePub format. As most of our work is in Africa and developing countries, it is vital our knowledge is shared in the format that is accessible on the only device many millions of people have.

UNESCO’s global impact is based on the prior work of OER legends including Susan D’Antoni, Sir John Daniel, and Stamenka Uvalić-Trumbić. UNESCO never works alone and relies on invaluable support from COL again with Sir John Daniel and now Asha Kanwar, the European Union, Hewlett Foundation, Councils and Associations of Distance Education, Creative Commons, and numerous others.

2015 is the 70th anniversary of UNESCO – we were created seventy years ago on the idea peace had to be built in new ways, on human rights and dignity, in the minds of women and men. The 2015 UNESCO Education for All Global Monitoring Report, launched last week, shows progress but only one third of countries have achieved all of the Education for All goals. In September, the world will meet in New York to agree on the new Sustainable Development Goals (SDGs). Goal #4 will focus on Education. UNESCO calls on everyone in the room to use, develop, share, and promote OERs to achieve educational, and higher level sustainable development goals.