The Student Award is a new category that honors the outstanding endeavors of a student who has benefited academically from the use of open educational resources (OER). The award is presented to the student whose achievements may inspire others to pursue degree programs that utilize open resources. We are very excited to be able to recognize two students in this category: 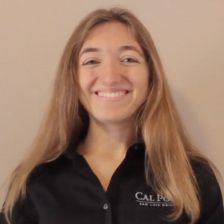 Natalie created a promotional campaign for College of the Canyons OER initiative to raise awareness of OER for both students and faculty. Her open personality has made her an excellent ambassador for OER. She has spoken at workshops and conferences, and trained faculty and students on OER search and open licensing. Natalie has been primary designer and technical support in creating multiple open textbooks are used by thousands of students. She has made a lasting contribution to OER projects at College of the Canyons by establishing the workflow for creation of open textbooks and by training other students to work on our OER projects. The local impact of Natalie’s contribution is demonstrated in the growth of total OER adoptions at College of the Canyons during her time on our OER team: from 40 courses to 80 courses using OER; from $1.5 million savings for students to $3 million savings for students. Natalie has helped to shape the OER degree initiative in across the state of California. There are 114 California Community Colleges, educating more than 2 million students every year. The OER degree initiative aims to provide every student the opportunity to study while using only OER. Thus, Natalie’s creativity and dedication have helped to establish open education as a legitimate pathway for over 2 million students.

Natalie’s creativity and dedication provide an example of the strong and sustained impact that a student can have on open education. Natalie’s enthusiasm for learning and spirit of collaboration make her an excellent ambassador for the open education movement.

Ms. Gadamsetti is an extraordinary young student leader who has both benefited from the use of OER in her undergraduate classes and worked hard to ensure that thousands of other students across the country are able to reap the same benefits. In her role as President of the Mount Royal Student Association, Ms. Gadamsetti has worked tirelessly with her peers to raise awareness of the problem of textbook unaffordability and of the availability of OER by advocating to students, faculty, and administrators and organizing workshops, lectures, and other events. In addition to her efforts to encourage OER adoption at her own campus, Ms. Gadamsetti has been an especially effective advocate on the national stage. As Chair of the Canadian Alliance of Student Associations and a representative of more than 250,000 students across the country, Ms. Gadamsetti has been instrumental in lobbying the federal government to develop a strategy for OER and to accompany this strategy with support in the form of $8 million to support OER development and distribution. Thanks to the efforts of Ms. Gadamsetti, who stressed the innovative learning benefits associated with OER, in December 2017 the standing committee on finance directly adopted CASA’s recommendation. This represents a hugely important step in the Open Education movement in Canada, which until now has been supported only by individual Provinces.

Ms. Gadamsetti’s nomination is a passionate and articulate young leader who has been able to mobilize support for open education by influencing her peers, educators, and policy makers. As OER advocates from across Canada, we believe that Ms. Gadamsetti has already made extraordinary contributions to advance openness in education and we are delighted to recommend that her work be recognized through the OEC’s student award.