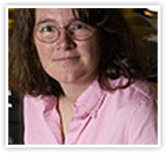 I left my rural hometown of Stevinson, CA (population: 262) to come to Stanford as a wide-eyed freshman in 1985. That tour passed through SLE, the LSJUMB, a half-dozen changes in my major, and I emerged with a Mathematical Sciences degree. A few years out in the “real world” were enough to send me running back for grad school in computer science and I segued into my current position as a lecturer in 1992 without setting foot off campus again. I teach courses in the undergrad systems curriculum, including programming methodology and abstractions, language paradigms, compilers, and object-oriented design and development, but I especially enjoy working with the section leaders in the CS106 courses. I have been the advisor to the Stanford SWE and ACM-W chapters and recently served on the Computer Science Advanced Placement development committee.